This guide aims to clear that confusion, filling you in on everything you need to know about chrome fire extinguishers, including their various functions, most popular uses, and relevant associated British Standards.

Over the years, you may have become familiar with the standard-issue red fire extinguisher, but recently an increasing number of workplaces and organisations have started to opt for chrome fire extinguishers instead. So, what are the differences between the two types of fire extinguishers and why have they become so popular?

What are chrome fire extinguishers?

Chrome fire extinguishers, if being completely accurate, are actually manufactured from stainless steel or aluminium. However, once polished and finished, they feature an eye-catching chrome effect – hence their name. It is generally recommended that the aluminium types are chosen due to its ability to withstand high gas pressures, but remains lightweight and easy to handle.

Where are they used?

Chrome extinguishers are most commonly found in locations where visual appeal is a high concern. This means they are particularly popular in environments such as hotels, reception areas, restaurants, modern offices, and show homes.

In addition, because they are manufactured from stainless steel or aluminium, chrome fire extinguishers are less prone to corrosion and are therefore suitable to be held in outside areas or in places with substantial amounts of moisture i.e. swimming pool, spas and marine environments.

Unfortunately, their design does have some drawbacks. Chrome fire extinguishers are more difficult to see than their red counterparts, so it’s recommended that proper signage is used to help draw attention to their location. 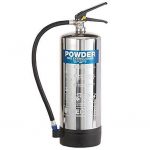 Are they legal and do they comply with British Standards?

In addition, all chrome extinguishers made in the UK are manufactured under ISO 9001:2015 Quality Supervision and tested in accordance with BS EN3 rules (even though they don’t actually comply with each one).

Therefore, when installing chrome fire extinguishers in your environment, you can rest assured that you are fulfilling your fire safety obligations and conforming to all fire laws and regulations.

Please note that this article provides basic easy-to-understand guidance of fire safety provisions and the key fire safety information required to comply with legislation. Our articles are reviewed regularly. However, any changes made to standards or legislation following the review date will not have been considered. We aim to assist you to understand the fire-related terms within your Fire Risk Assessment.  It does not provide detailed technical guidance on all fire safety provisions, and you might require further advice or need to consult the full standards and legislation.

Please take a moment to have a look around our website where you will find related articles and guides to all the services we can provide your business with, from providing Fire Risk Assessments, fire safety training, full advisory service to Articles on Fire Safety Provisions and our Top Fire Safety Tips!

Need Help? We are just a click away!
CONTACT US
Close Menu
We use cookies to ensure that we give you the best experience on our website. By continuing to browse this site or choosing to close this message, you give consent for cookies to be used. OK